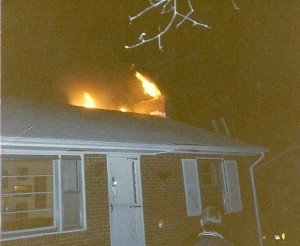 I certainly would hope that no one would ever experience one of these hostile chimney fires in their home. Many a chimney fire ruined a Christmas or New Years Holiday gathering. Chimney fires are known to be either very quiet and almost an undetectable rumbling, or as many customers has told me it had a sound like that of a very loud jet aircraft or freight train going through the house.

This loud tornado wind sound is caused as room air is being sucked up the chimney flue and is often accompanied by hot flames that are shooting out of the chimney, while spitting hot chunks of swollen creosote on to the rooftop. A loud popping and cracking sound is often heard as terra-cotta clay flue tiles are breaking from the rapid heat expansion.

It is not uncommon to hear from a homeowner that a neighbor came pounding on their front door, shouting that flames from a fire where shooting out of the top of their chimney, then the local fire department was called and came rushing to the fire.

As I mentioned, to often chimney fires are not heard at all. It may be a quiet rumbling and referred to as being slow burning. This slow burning fire is what chimney sweeps often discover during a standard maintenance chimney cleaning. If a chimney fire is discovered, a video scanning of the interior of chimney liner is recommended, we would be assessing for any possible damage. I will say that it is rather unusual that no fire damage had occurred, as this intense heat from the fire can exceed 2,000 degrees, buckling metal chimney pipes and cracking flue tiles as well as damaging mortar joints found both in the smoke chamber and the flue tiles mortar system. 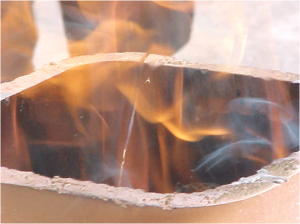 Signs of a Chimney Fire https://youtu.be/5e2_6HUVtjI

It is very important to understand that fire is only supposed to be present in the firebox area, and not in the smoke chamber or chimney flue system!

According to building codes standards, a fireplace chimney flue system must be able to contain the products of combustion (smoke) and that the fireplace must be repaired before further use, if it is damaged! 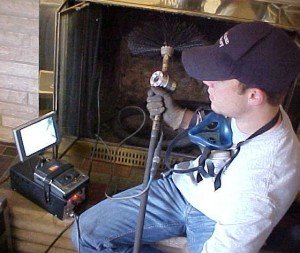 Video Scanning the interior of  the Chimney Flue

I would recommend that a chimney contractor photograph damage areas of the chimney, bag a sample of the swollen or puffed creosote. As a chimney contractor we will have our customers sign our receipt of our discovery, documentation and communication of their chimney fire incident and to discontinue use further use, until proper repairs are made. We will also recommend having the homeowner contact their homeowners insurance carrier, as this is most often considered a “Sudden Occurrence” within the insurance industry terminology and possibly chimney repairs of like and kind may be covered under their Home Owners insurance policy.

In conclusion Christmas …..is a perfect time for a Chimney Fire, as any homeowners toss their Christmas wrapping paper and cardboard boxes in the fireplace and ignite a needless chimney fire. As a side bar there are two other times of the year that a chimney fire often occurs. One is when the Christmas tree is broken apart and used to get a roaring fire started. The other time is on those “Special Football Sundays” as greasy pizza boxes are pitched into the fireplace… A loud whoosh can be heard as a chimney-fire is now blazing out of control from the top of your house. Smoke alarms are blasting, the sound of fire truck sirens can be heard 6 blocks away, as they are coming into your neighborhood to connect their fire-truck hoses up to the water hydrant, ladders are going to be thrown up onto your gutters to mount your rooftop to begin attacking your chimney fire. This doesn’t need to happen to you and your family over the holiday season or at all. That is if you’re having your fireplace regularly serviced and practices some basic fireplace burning techniques.