As burning season approaches, many homeowners already have it in their fall checklist to have their chimney inspected and cleaned.

Of course, this includes prospective homeowners as well. A fireplace is never more appealing than when home shoppers walk through crisp, cool air on their way from the car to their next home tour.

Many homeowners, and even real estate professionals, are not aware that all chimney inspections are not the same. As home inspections kick in for properties, home buyers don’t just concern themselves with aesthetic appeal, but safety as well.

To address this concern, the National Fire Protection Agency (NFPA) has established guidelines for chimney and fireplace system inspections. As outlined in their NFPA 211 publication, there are three levels of classification for these inspections: Level 1, Level 2 and Level 3.

Most inspections that are given by chimney professionals to existing homeowners are Level 1 inspections. A Level 1 inspection includes an examination of the readily accessible portions of the chimney exterior, interior and accessible portions of any appliance in the system and its connection to the chimney. The basic structure of the chimney is inspected as well as the flue, verifying that there are no obstructions or combustible deposits in the system. A basic inspection of any appliance and its installation is also performed, including connections to the chimney system.

If there has been no change in the condition or the use of the system (for instance, no damage and roughly the same amount of wood or fuel is being burned), a Level 1 inspection is sufficient.

If there is any change to the system, such as a new fuel (like converting from wood use to natural gas use), a new lining (for example, relining with a stainless steel liner) or any appliance change, a Level 2 inspection is required. Additionally, if there is a home ownership change or some external event has damaged the chimney (such as a lightning strike, earthquake, etc.) a Level 2 inspection is necessary. 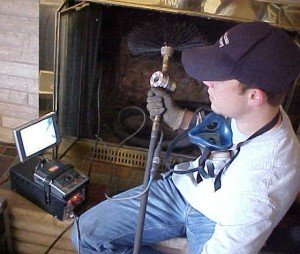 A Level 2 inspection will include all elements of a Level 1 inspection, but also requires the evaluation of additional accessible portions of the chimney both inside and out, including areas that may be harder to access like crawlspaces, basements and attics. The person inspecting these areas should look for combustible material and ensure the chimney system has sufficient clearance from these materials.

It also requires full visual inspection of the interior of the flue system, which usually requires a video scan. This is meant to examine all flue joints and internal surfaces within the chimney to look for gaps or deterioration.

In unusual or extreme cases, when a Level 2 inspection might uncover a potential issue and troubleshooting requires accessing an area of the chimney system that is not readily accessible, a Level 3 inspection should be performed. If a serious issue is suspected, a Level 3 inspection could include removing or destroying portions of the system to reveal hidden areas not otherwise accessible in other forms of inspection. This could include the chimney crown or an external or internal chimney wall, and should only be done when it is absolutely necessary and when a serious situation is suspected.