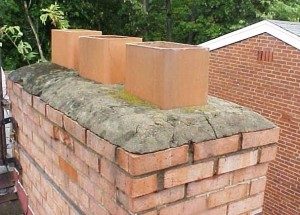 Over the past thirty years, I have seen and estimated thousands of damaged chimneys. This is usually due to poor design or construction of the wrong materials. This damage usually resides in the chimney crown.

Customers often ask whats the best crown repair after getting the confirmation of chimney crown damage. Remember, the chimney crown is not a cap. The purpose of the crown is to shed water off the top of the brick chimney chase. Its also to cap off the brickwork of the chimney.

Freeze-thaw damage is the most frequent type of damage I see to chimney crowns is. If your chimney is saturates with cold rain and the temperature drops well below freezing, freeze/thaw damage occurs. Ongoing freeze-thaw cycles will not only cause cracks but can cause premature brick spalling.  Spalling is the brick faces popping off. You may see them lying on the rooftop or on the ground near where the brick is breaking.

Customers don’t understand why the brickwork near the crown is damaging when the rest of the brick seems fine. Well, if you stop and think about it: most bricks on a home are get protection by overhanging leaves and gutters. The chimney sticks up on the side or very top of the house. This exposes it to winds and the coldest temperatures.

In a nut shell here is the real problem surrounding why chimney crowns need repaired. Your chimney crown construction should be of concrete mix and not brick mortar mix. A properly constructed crown will have a membrane under the concrete. This separates it from the top of brick chase. The concrete mix itself should have wire mesh or reinforcing fiber incorporated into it to further strengthen the crown. Chimney flue tiles will stick out of the top of the chimney, and each flue tile is to have an expansion joint around it so that the flue tiles expand when the fireplace or appliances they are venting heat up without pushing on the crown causing it to crack.

Most building codes do not require an overhang (a drip edge crown), but definitely suggest to keep the water shedding off of the sides of the chimney. Many bricklayers adopt the attitude of their building superintendents to “hurry up and finish the job”. It is quite obvious today that they were all getting paid for production, not their craftsmanship. At the end of the day, when all of the bricks are put in place, if the bricklayer has enough mortar mix on the board they won’t climb down the scaffolding and mix up the proper concrete material to finish the crown. This is the ugly truth of chimney crowns, especially those on older homes.

All in all, I would discuss the options that your chimney repair man has cited as possible and also call out for a second or third opinion. Sometimes the chimney crown can use resurfacing and other times the crown needs to be removing and replacement with the correct materials. In severe cases where the chimney has not only damage to the crown but also to the brick on the top of the chimney, the top portion of the chimney may need rebuilding.