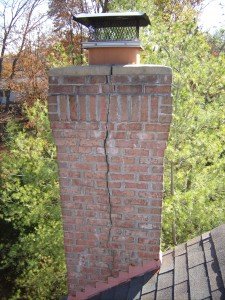 The number of calls that we receive from customers who call us the day after a chimney fire saying that their neighbors came knocking on the door to let them know that their chimney is on fire is concerning but not necessarily surprising for those in the industry. When certain conditions exist, a chimney fire is able to burn slowly as opposed to explosively making it such that the fire is hardly detectable from people inside the home. A chimney fire that burns explosively is what is generally described as a chimney fire. When a rapid burning fire occurs in the chimney there is a loud rumbling noise similar to a freight train.

<——–This one cracked the chimney right up the middle.

<——-  Look down this chimney flue and you will smell it.

Creosote in the chimney flue makes having a chimney fire of any kind more likely.

This type of creosote can be easily removed with a chimney’s sweep brush because of the looseness of its deposit pattern.

This type of creosote is more difficult to remove and often requires stiffer brushes or even a scraper to remove.

This type of creosote acts like candle wax. When stage 3 creosote gets to a certain temperature it drips.

Excessive buildup of stage 1 creosote makes for plenty of fuel for a slow burning chimney fire to occur up in the top portion of the chimney. When glazed creosote occurs, there is a good chance that a chimney fire has also occurred. When chimney fires occur, the flue tiles often crack vertically due to the rapid temperature change in the flue system. The stage 3 creosote drips down covering such damage and hardening, hiding a potentially dangerous situation. Creosote has the tendency to build up at various parts in the chimney itself, specifically the in the smoke chamber and near the damper.
Creosote buildup, no matter what stage it is in, has a very ” pungent odor ” and has the ability to permeate an entire house, especially if your chimney also has drafting issues. Any slight downdraft will force these odors into the home. 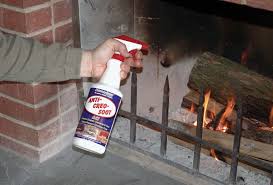 There are AntiCreo-Soot chemicals on the market that work to reduce the smell and volume of creosote in the chimney, but these often take many applications in order to eliminate the smell entirely.