If you installed a cap on your chimney that was not stainless steel there is a likelihood that you have rust stains on on the top of your chimney which are very unsightly. 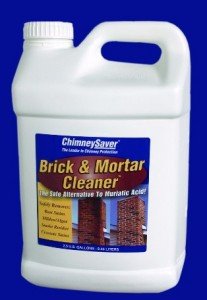 Removing rust stains and removing the source of the rust are both very important because if the rust is not remove it can deteriorate your brick over time. Removing rust is not difficult but you also want to avoid staining the brick with a strong acid or even eating away at the face of the brick. If the stain is at the very top of your chimney and your chimney is very tall you may want to call a professional to clean it.

Your safety is the number one priority in an endeavor such as this and if you do not have a ladder that will safely reach the top of your chimney or you don’t have any safe way to access it then you should have the stains professionally removed. Do not power wash your brick to get rust stains off, especially if the brick is old or crumbling because that will not only further destroy your brick but more than likely “will not” remove all of the stains.

SaverSystems “Brick and Mortar Cleaner” can be purchased at here.

There are products on the market that are specifically designed to remove rust stains. The SaverSystems  . . . “Brick and Mortar Cleaner” is a Professional grade cleaner that removes rust, mildew, algae, dirt, mortar splatter, and creosote stains. This product can also be used for removing rust stains from concrete. It is safer to use than muriatic acid which was once recommended for cleaning rust off of masonry surfaces.

Muriatic acid can burn the and could eat away at the face of the brick as well. While protective eye wear and gloves should be worn whenever handling any masonry cleaners.

SaverSystems  . . . “Brick and Mortar Cleaner”product is safer than muriatic acid and will help in rust stain removal.

If the rust stains were caused by a chimney cap that was painted black or was of poor quality metal it may have caused this rusting .

A stainless steel chimney cap is key to preventing rust stains from occurring again. Remove the offending cap immediately and replace it with a top mounted stainless steel cap, which sits on top of the flue, or a top sealing damper and chimney cap combination, like the LockTop system which not only keeps birds and other critters out of the chimney it also seals off the chimney at the top forming an air tight seal when the damper is closed to keep warm air in the home and cold air out when the chimney is not in use.